When a high electric field is applied to a disordered semiconductor the electrons are theorized to behave as if they had a higher than lattice effective temperature. We hope to prove this effect by showing that it can produce a Seebeck voltage. The main difficulty lies in the high necessary field strengths which require very small mesurement structures. If successful this might be useful for high frequency rectifiers. 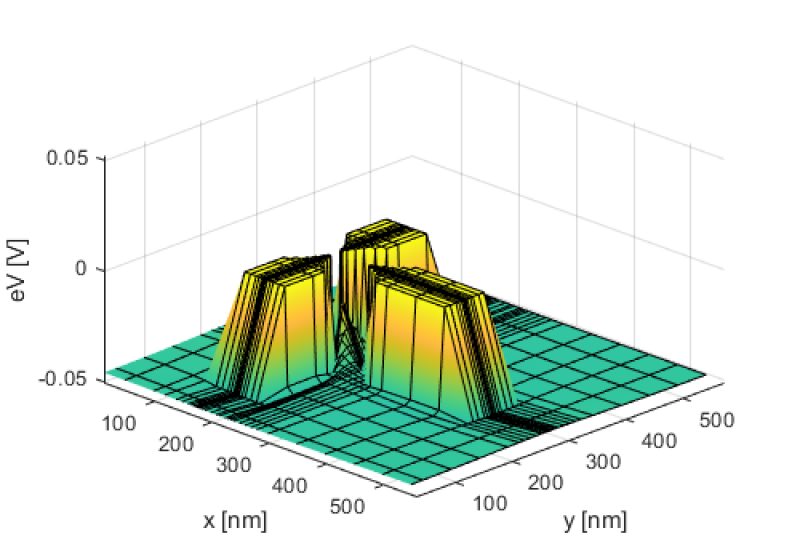 Organic ferroelectrics, such as BTAs, are of great interest due to their switching properties. However, the strong electric fields that are often required to achieve saturation polarization limit their possible applications. A possible solution is to pre-align the molecules, i.e. via dip-coating. The already present results suggest that dip-coating in general enhances the ferroelectric switching of pristine films. We expect the results to be transferable to other small molecular ferroelectrics.

Investigation of organic molecules on ferroelectricity

In cooperation with the Kivala group, dielectric measurements are applied to their synthesized Tritridecanamide molecules in order to investigate possible ferroelectric behavior. This is done via searching for indices of phase transitions in the measured capacitance spectrum. The measurements are done for different frequencies and temperatures. When a potential phase transition is discovered, it is further investigated if the material has a Curie-Weiss behavior which is a prerequisite for ferroelectricity. With this method, it can be determined whether or not a material is a ferroelectric.

Organic solar cells are photovoltaic generators made predominantly from carbon-based materials, such as plastic substrates, conductive and semiconducting molecules or polymers. While organic solar cells can be described in some ways similar to their inorganic -- commonly Silicon-based -- relatives, they work on fundamentally different principles. Those include non-bandlike transport, excitonic absorption properties, or charge separation at the phase interfaces of donor:acceptor semiconductor blends, that are yet to be fully understood. We are utilizing a highly sensitive, electro-optical absorption spectroscopy method to directly map the density of states in the blended phases and at their interface in the steady state to study how energetic disorder, vibrational transitions, and the effective temperature of generated charge carriers influence the solar cell performance and efficiency.